he Birth Control Pill for Men Is it in Our Near Future? 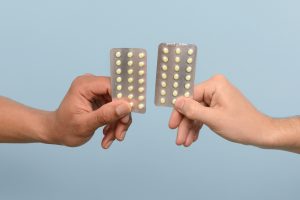 The Pros and Cons Of Male Birth Control: Will Men Be Interested In Using It?

Birth control has always been part of a woman’s journey. Scientists are now saying that we could see the male birth control pill soon. Are men going to be interested in using it or will they just shrug it off?

Some of the benefits of using a male birth control pill

The first major benefit is a little more obvious than people realize. Imagine guys, not having to worry about getting the girl you are dating pregnant. I know there are condoms, but studies have shown that sometimes they are not as effective as people want them to be.

Men will actually, for the first time, get more responsible with their bedroom actions. Men have never truly gained a real responsibility with protection.

The guy swears he will pull out and does not. That has happened more times to women than I can count. I am going, to be honest: guys are not good at pulling out. The feeling they get during sex is so good that they forget or just do not want to. Either way, they do not act responsively.

Men will also gain more awareness of what women go through with birth control. Guys will be on a monthly schedule like women are.

Let’s be honest: guys do not get the lecture from their doctors about birth control that women do. Guys are allowed to act irresponsibly because our society encourages it. Our society places everything on the girls. The guys can sit back and do their thing.

Male birth control would require men to try different methods and monthly appointments with their doctor.

It would also require our society to become more progressive when it comes to reproduction rights and choices. I doubt men would feel the way they do right now if they had to take the pill. A male birth control pill would definitely encourage honest talks with couples, especially about sex.

One of the negatives for this idea is that men would use the pill as an excuse to act more irresponsibly. The number of guys who would still use condoms may decrease.

“I do not need condoms, baby. I am now on the pill. We can have sex as much as we want.”

Guys would definitely get what they want, more sex. However, we have to stop to think about how the girl feels. Does she trust her boyfriend to take the pill when he is supposed to? What happens when he “forgets” to take the pill. She could place the spotlight on him for once.

There could be some couples facing a lot of trust issues they never encountered before. They may also have to face the idea of getting an STD or STI. Condoms prevent the spread of infection. The pill does not.

A guy could go out and have sex with multiple partners without his girlfriend knowing. What is she going to say when she gets infected? Once again, trust issues could become more intense for some couples.

One Other Thing To Consider

Do men have an incentive to take the pill? Some of them could argue that they can rely on their girlfriend to be the responsible one. Once again, it comes down to men not sharing their responsibility with sex. Men love sex. They love how it feels. What they do not love is when it makes them more accountable for what they are or are not doing.

Men do not deal well with side-effects. Girls have side-effects too, but men fail to make a compelling argument as to why they are different.

Only time will tell whether men grow more accustomed to the idea. What do you think? Will men embrace the idea or not?